What is “a value of store” that survives in the internet age? The charm of the city’s long-established model store “Ryubundo” 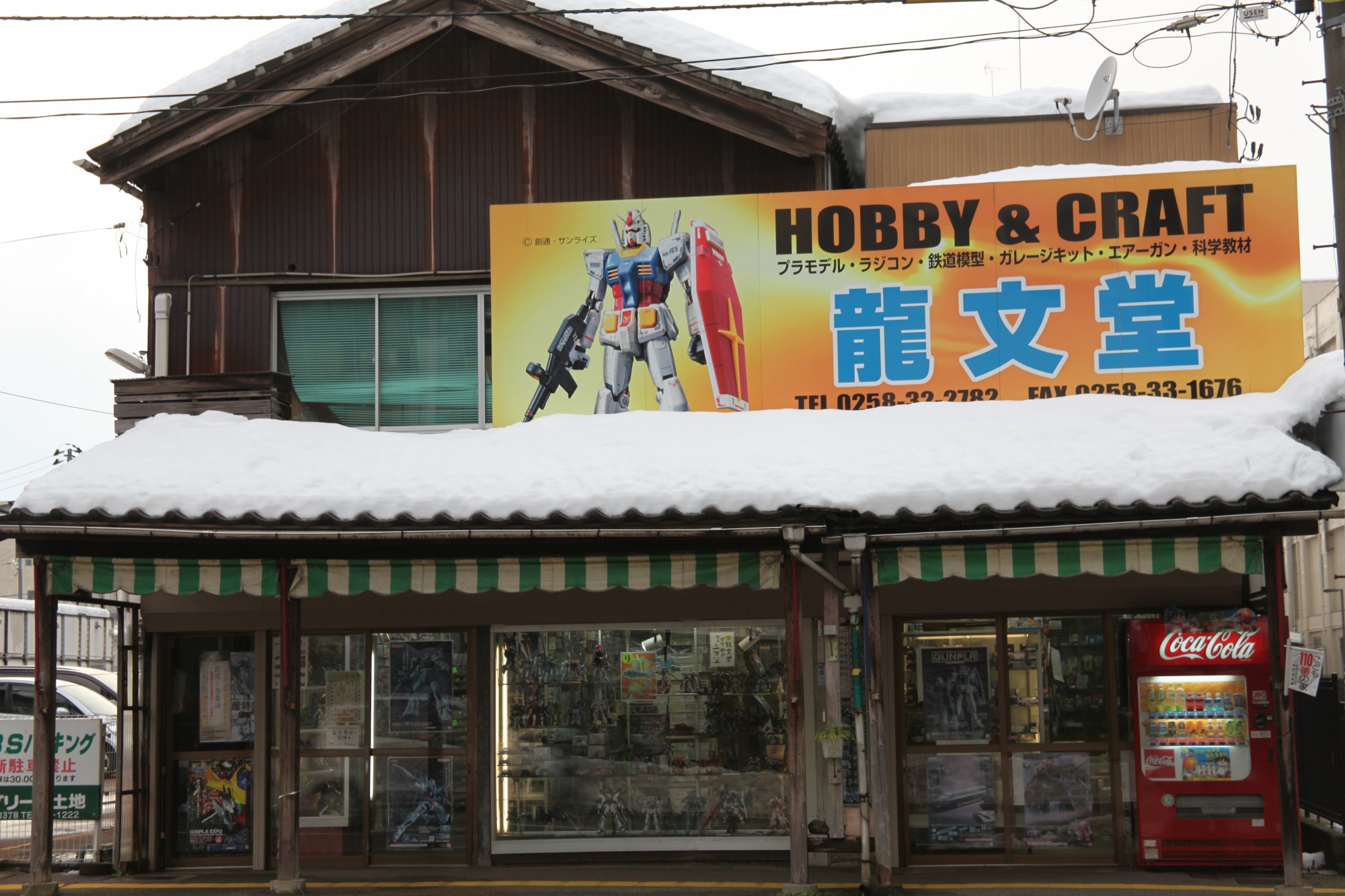 There used to be a model shop in the town around Japan. In particular, men in their thirties or older may have visited the shop once when they were children.

Although there are fewer model shops in the city nowadays there are still a lot of people who gathered in Nagaoka city because   there is a model shop where   the model culture originated.

A 10-minute walk from Nagaoka station, the “Ryubundo” in Omotemachi is a long-established model store with one of the longest history in Niigata Prefecture, which was established in 1948. It is said,”If you are born in Nagaoka, there is no one who does not know it”. The shop is attracting a huge support from the model mania – plastic model enthusiasts.

Fascinated by the charm of its quaint appearance there i a guest who commutes frequently from the distance to visit the shop.

――Why are people attracted to the shop? I visited the shop to find out why.

Up to the ceiling ! A wide variety of goods in store. 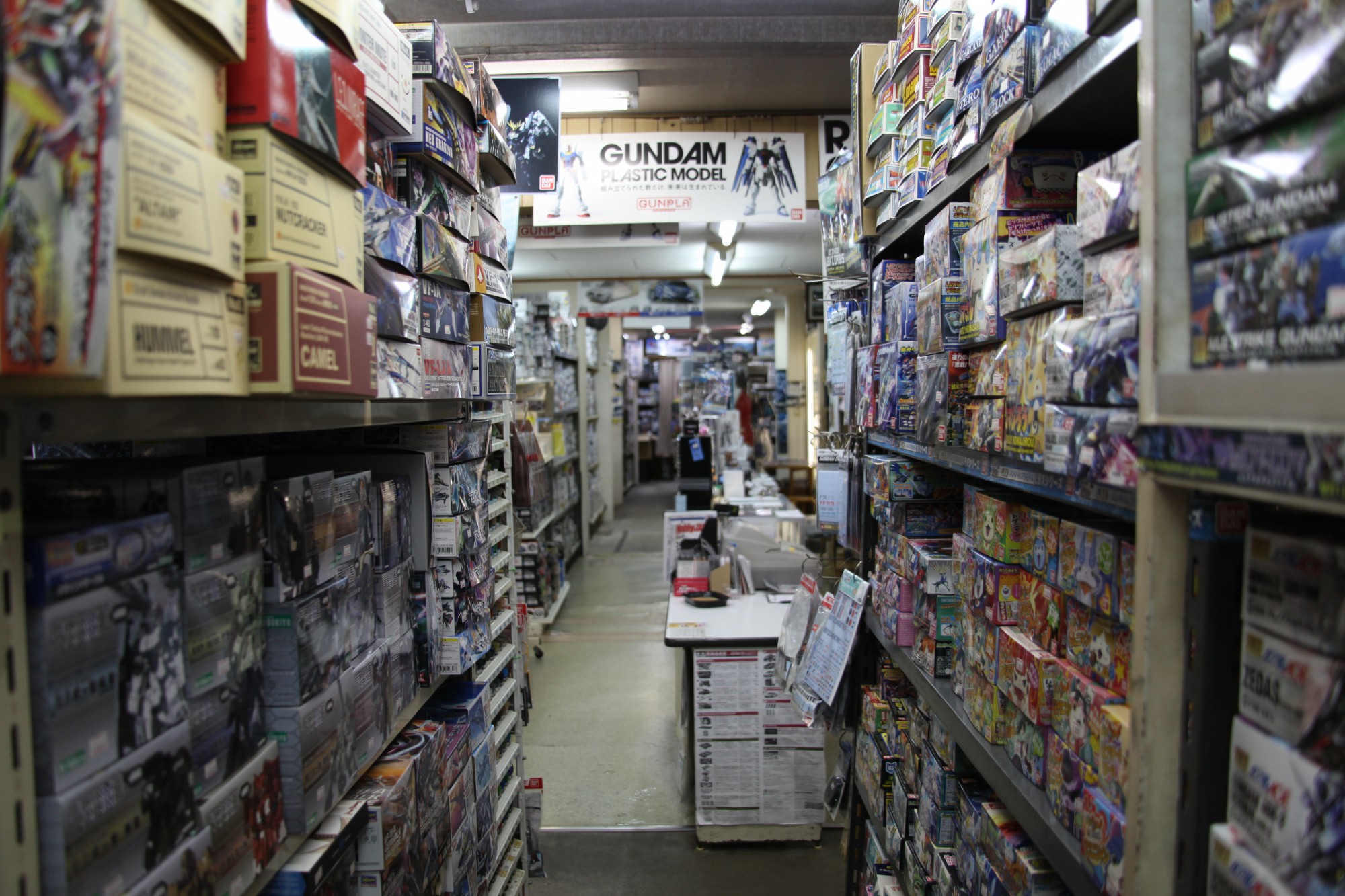 A number of products such as tanks, ships, Gundam Plastic Models (Gundam model kits) will greet you soon.

If you go to the back, there are airplanes, cars and motorbike models The shelfs are stacked with things to the brim from top to bottom and from all corners . This scene is beyond a doubt the best part. 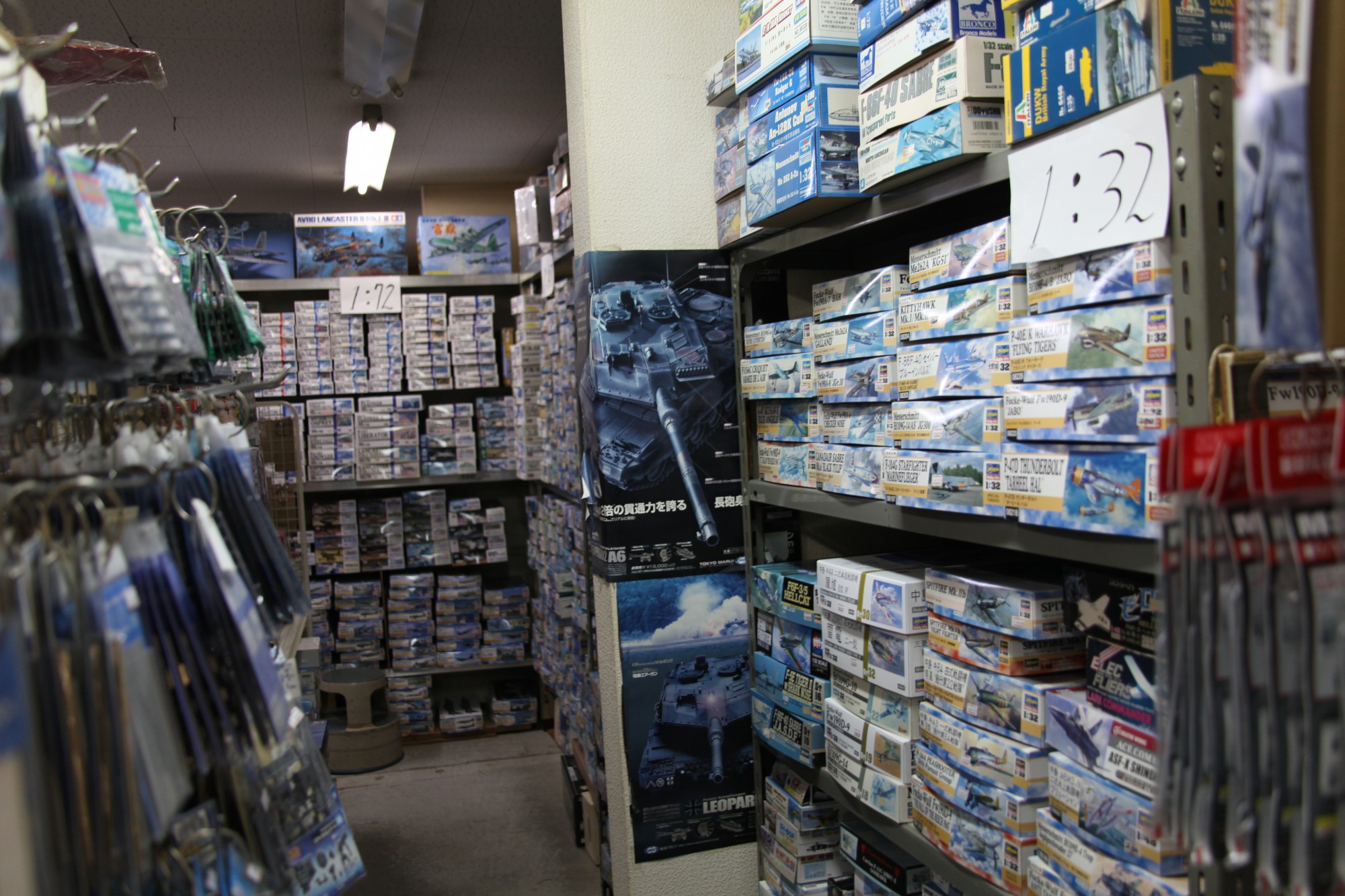 Airplane model Corner. It is generally deployed in 1/72 and 1/32 size, but both are covered. 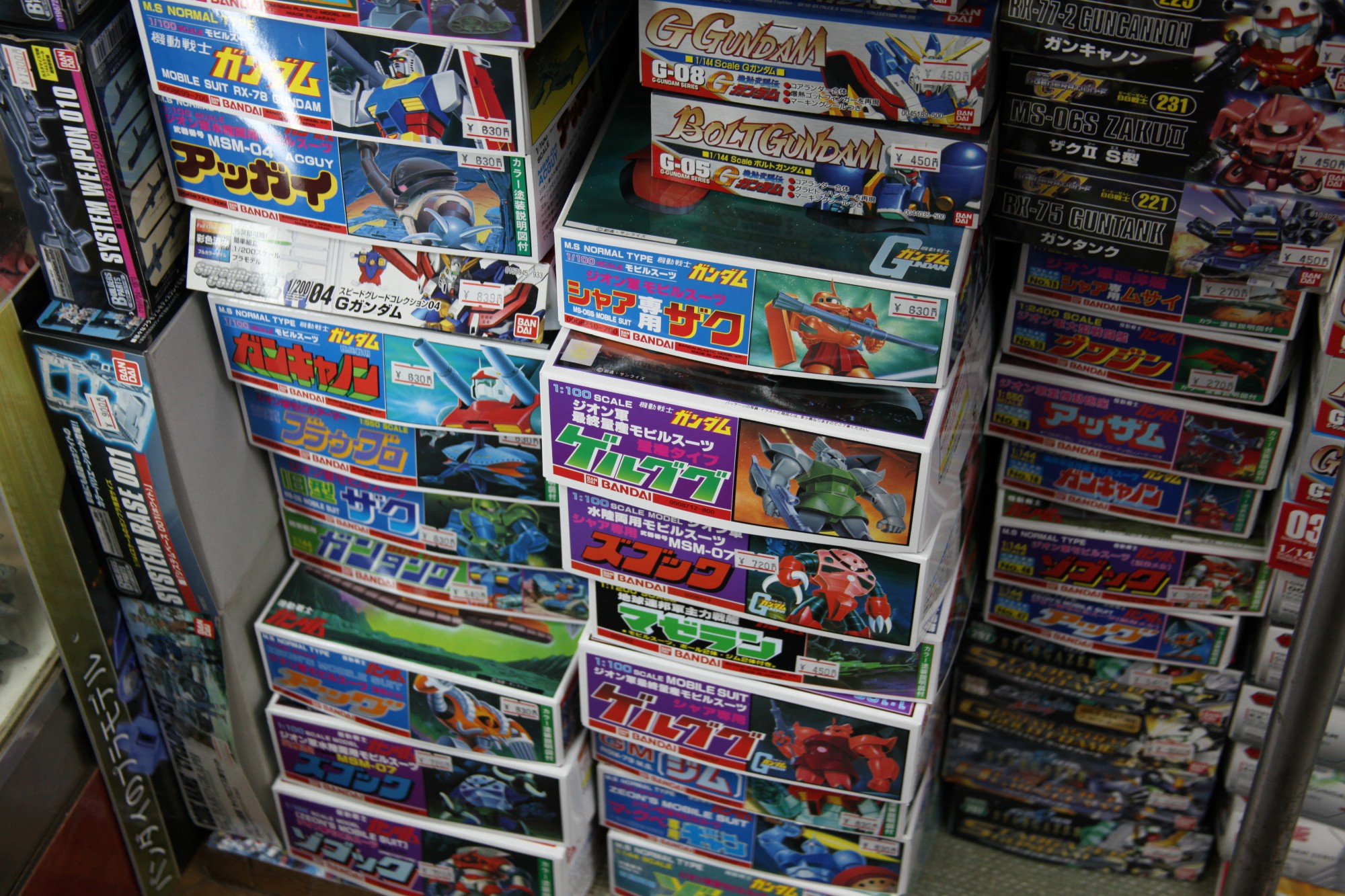 The nostalgic model of monochromatic and the reprinted edition of the Gundam Plastic Models. 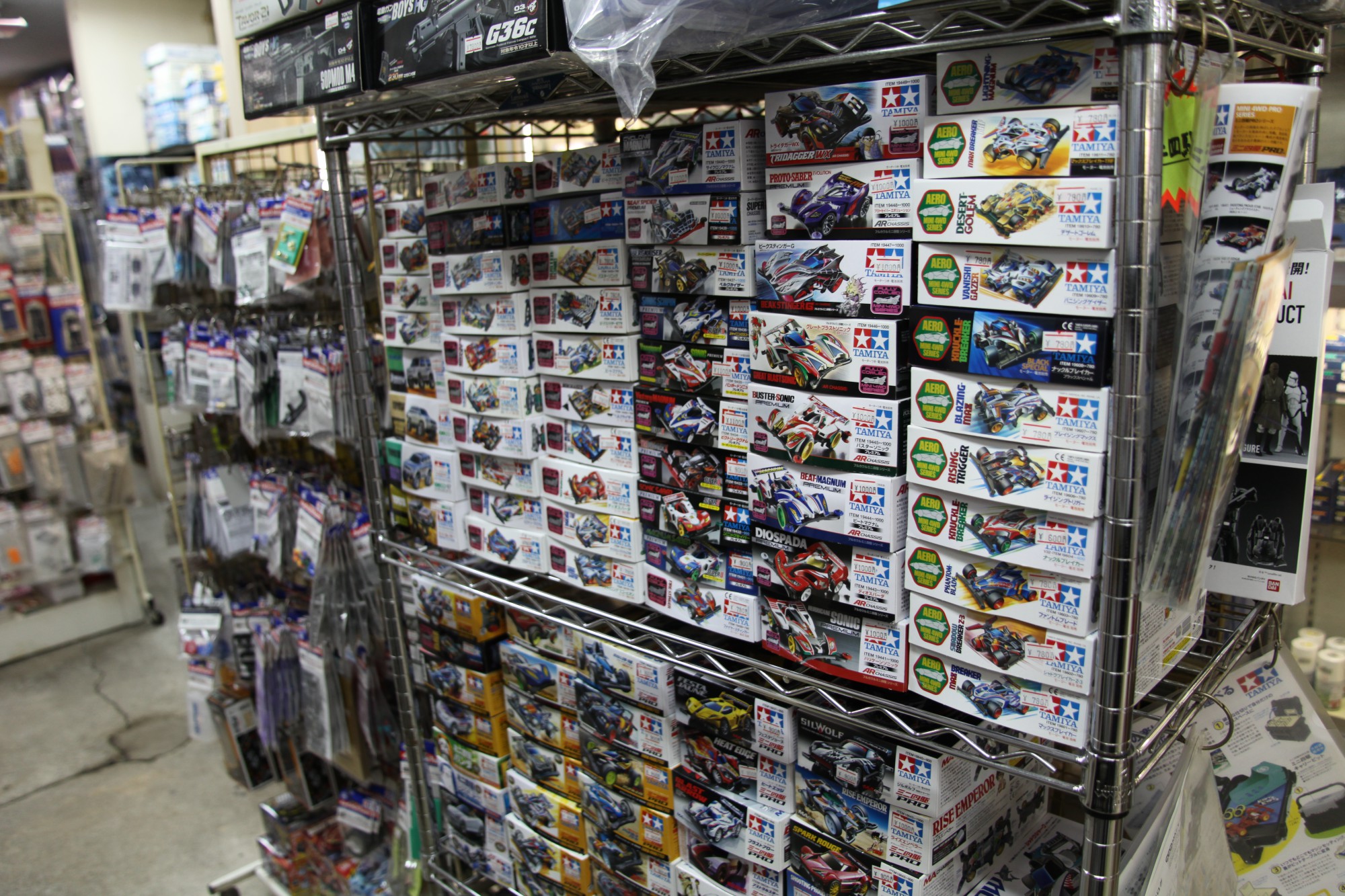 This is a mini 4WD corner. Even if you are not familiar with the model, I think there are many people that have made mini 4WD. 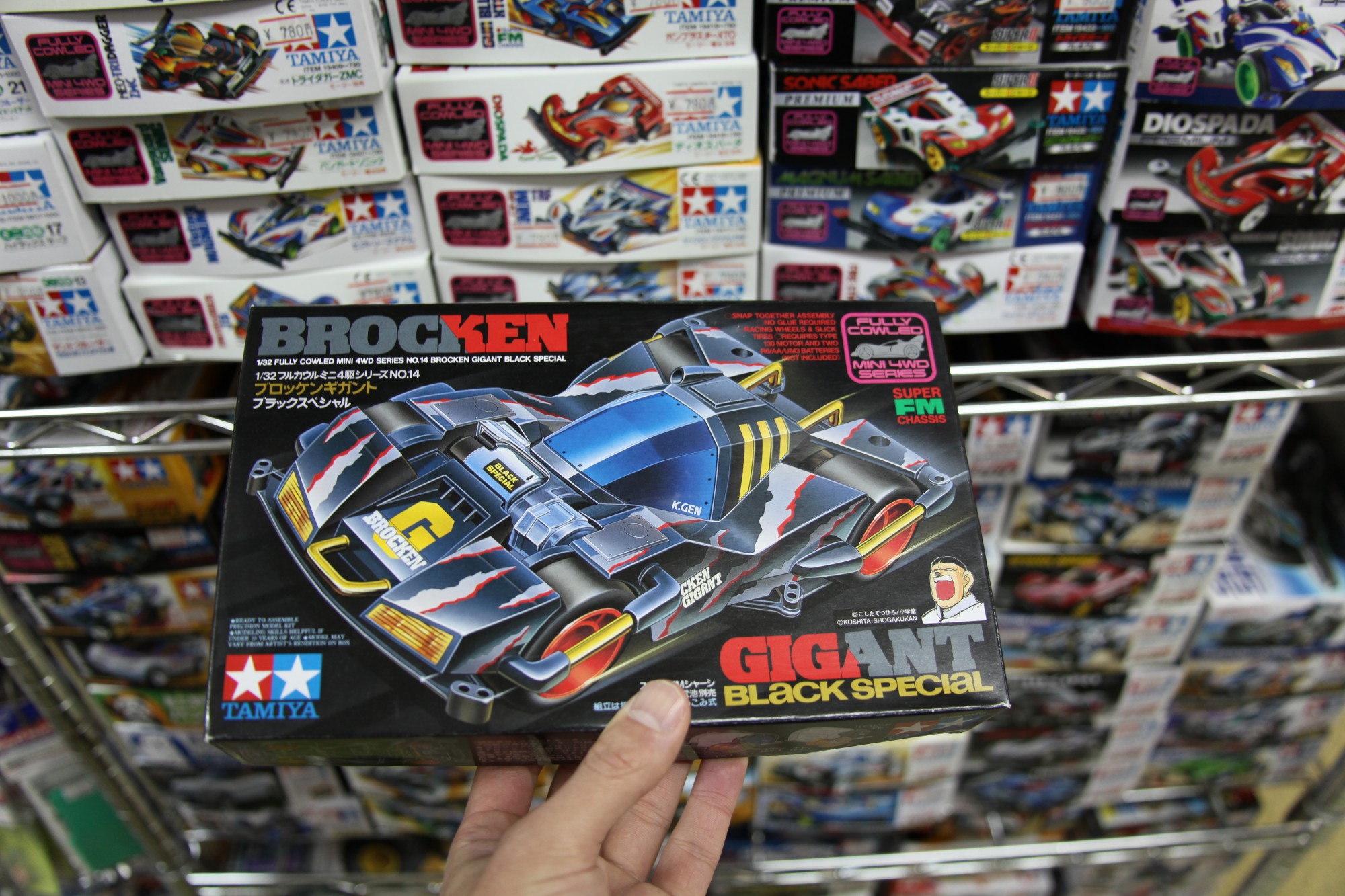 The shop have various kinds from the new model to the nostalgic model of the Mini 4WD.

Each one has different stories,

a work exhibited in the showcase

The showcase at the entrance is packed   with the work exhibited. 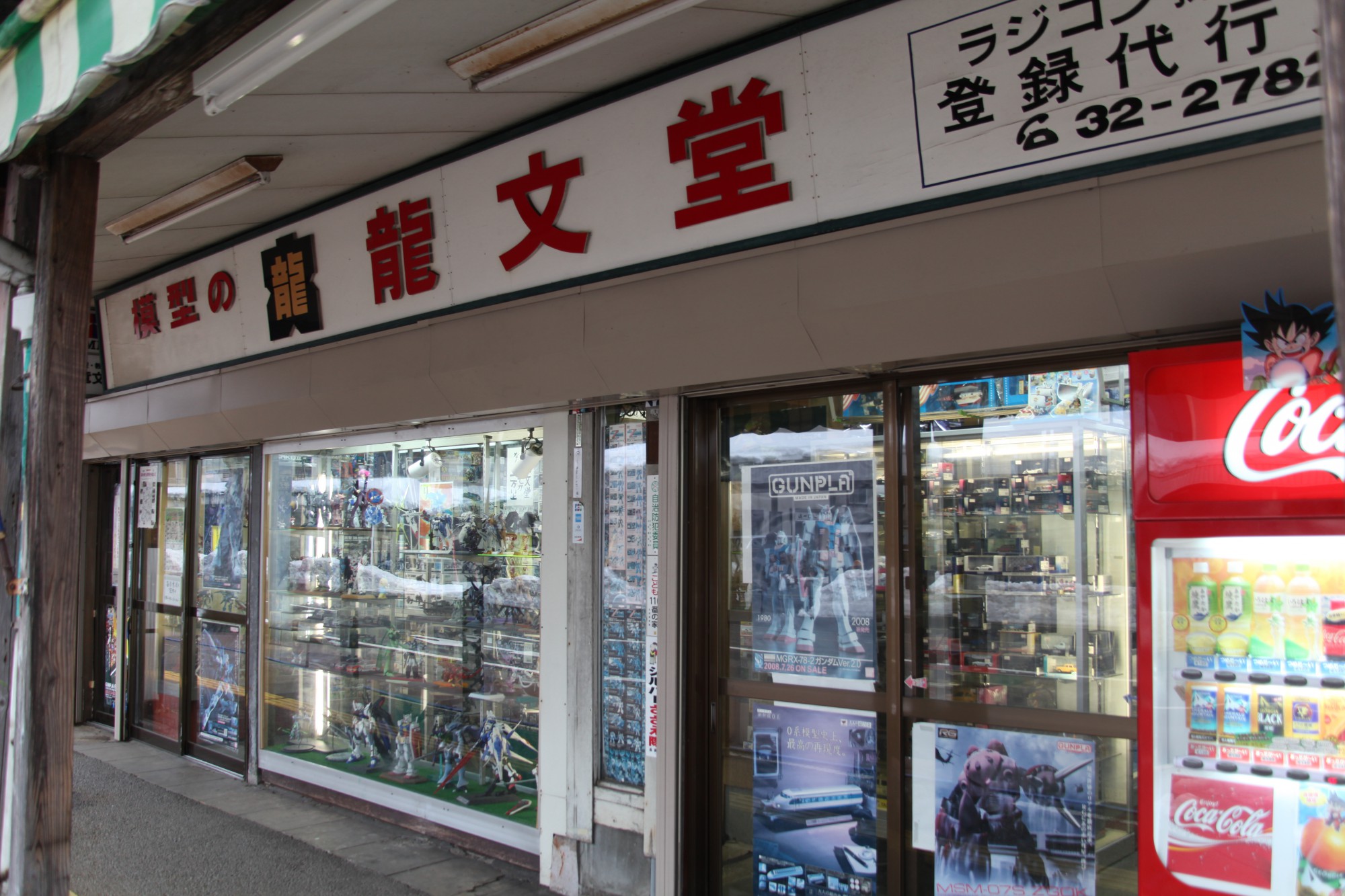 The showcase of the entrance is tightly decorated with the work exhibited.

It is called “Modeler” enthusiasts who do model making. The work exhibited shows the individual style of the modeler.

In general, in the model shop there are many places for exhibiting the work of the modeler. Ryubundo is also famous because there is a large number of works on display exhibit. Usually the modeler will ask the shop to display,

There is also the work which was brought by a professional modeler .

Even though the model parts are mass produced before they are assembled , each model may differ from another depending on how the parts are assembled and painted. There are stories of a number of people who teamed up to work on the model. I will introduce one of the works from among them. 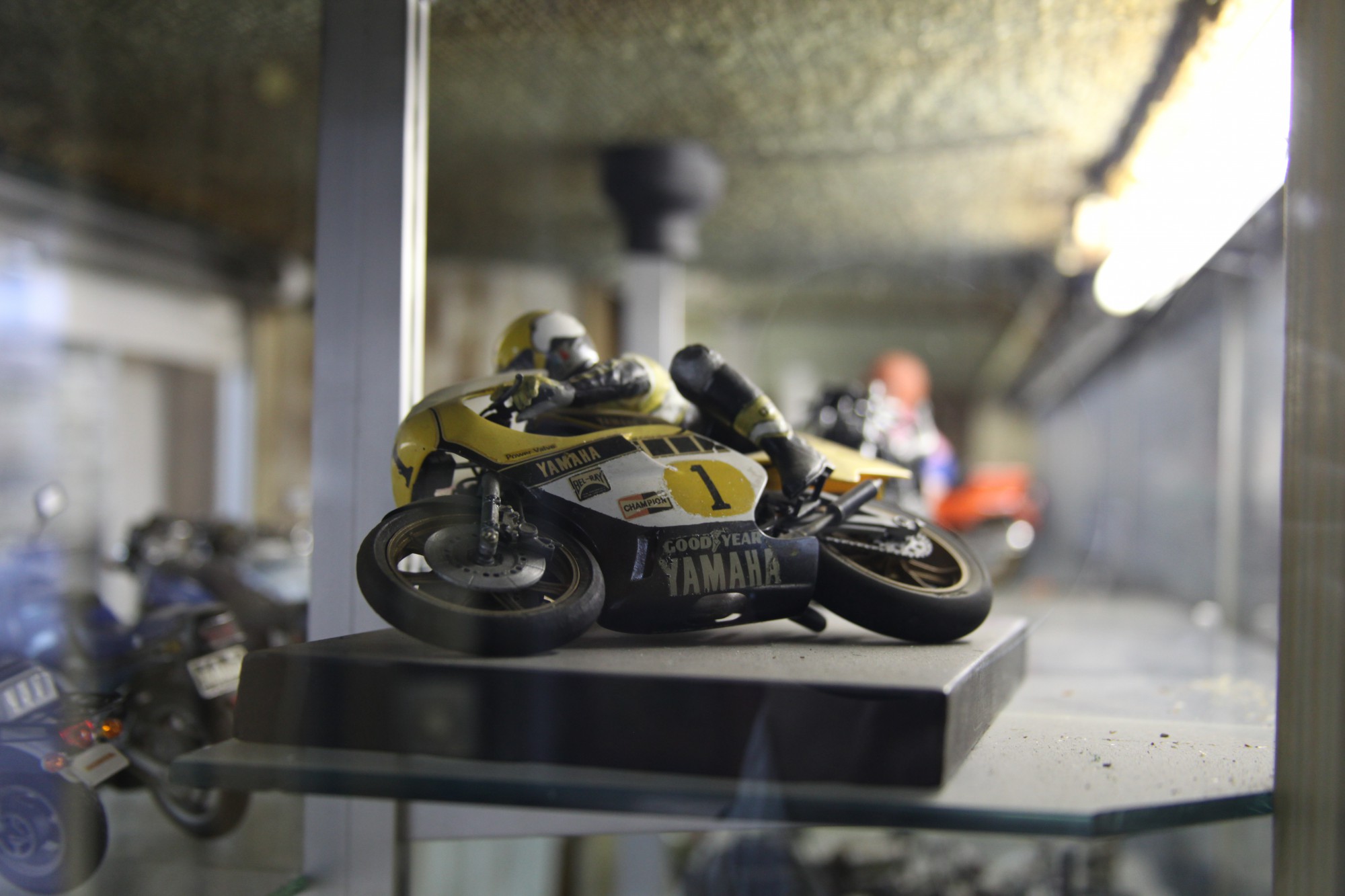 The model of this bike was produced by Jin Hoshino who lives in Shizuoka Prefecture now.

He was born in Nagaoka City (formerly Yamakoshi Village).

Hoshino visited Ryubundo thirty years ago. He was high school student. His friend who liked plastic model took him to the shop. Now he he comes to the shop every holiday.

Hoshino says ,”I became friends with a modeler who gathered in Ryubundo while I was there . I began to make a model while being taught the various techniques of modeling, such as technique of painting.”

The exchange space inside the store where the modeler mutually talks eagerly. It has become a place of succession of production technology.

Hoshino who originally liked motorcycles, especially the race motorcycles was absorbed in making the model. He brought his work to the shop every time he made a new one.

Hoshino began to have desire of not only the plastic model but also “I want to make the motorcycle actually”. After graduating from high school, he had a desire to work for a bike manufacturer in Shizuoka. He is currently in charge of developing a race vehicle in the motorcycle Development division.

Hoshino says,”I was looking forward to seeing the work s in the showcase since I started going to Ryubundo. That’s why it was so nice to have my plastic model decorating the showcase.” 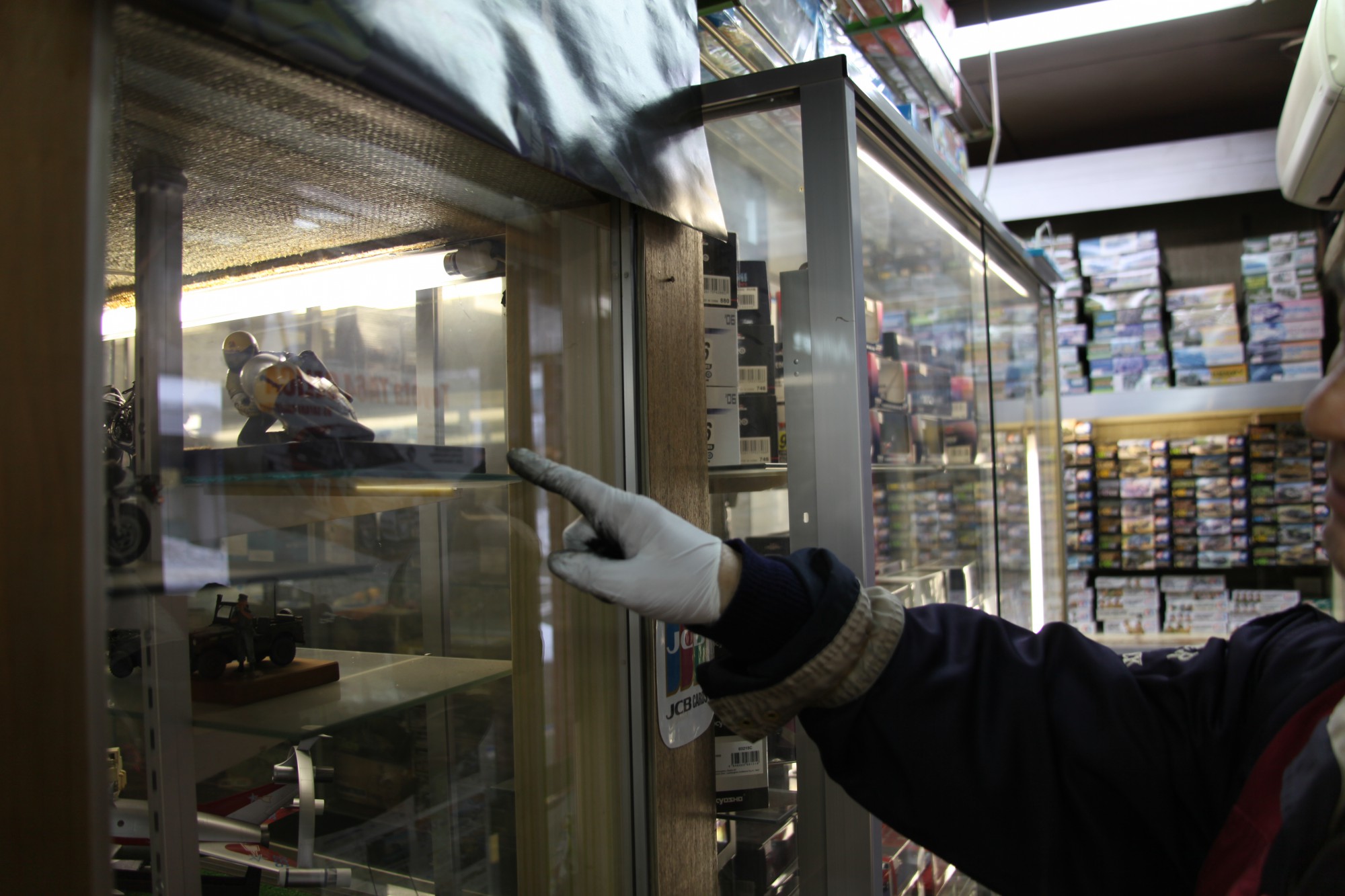 The display housed memories of the shop and the makers of the models . When things settled down after the Chuetsu earthquake and the exhibition continued to be important.

Hoshino is now active in the forefront of motorcycle development and works in oversea.

When I returned to my hometown after a long time, I visited Ryubundo and found my work.

“During the Chuetsu earthquake in 2004, I heard that the store was in a terrible situation, including the display. Nevertheless, I am very grateful my model is on display in the shop.”

In addition, “I want this showcase to feature the work of beginners who have made a new plastic model,” Hoshino said.

“At the time when I started to display the model of the bike, there were few people who made that kind of model I was allowed to display my model readily. If you want you to decorate your work, please try to do.”says Hoshino

When you make a kind plastic model that you like, do decorate it. There may be an unexpected exchange.

The value of the space as “store“where variety of exchanges are made by beginners to maniac.

On the day of the interview,Mr. I who is living in Nagaoka City,and a modeler of more than 40 years also visited the shop.I asked him about the charm of Ryubundo. He said,” It is said to respond to the demand from Beginner to maniac.” 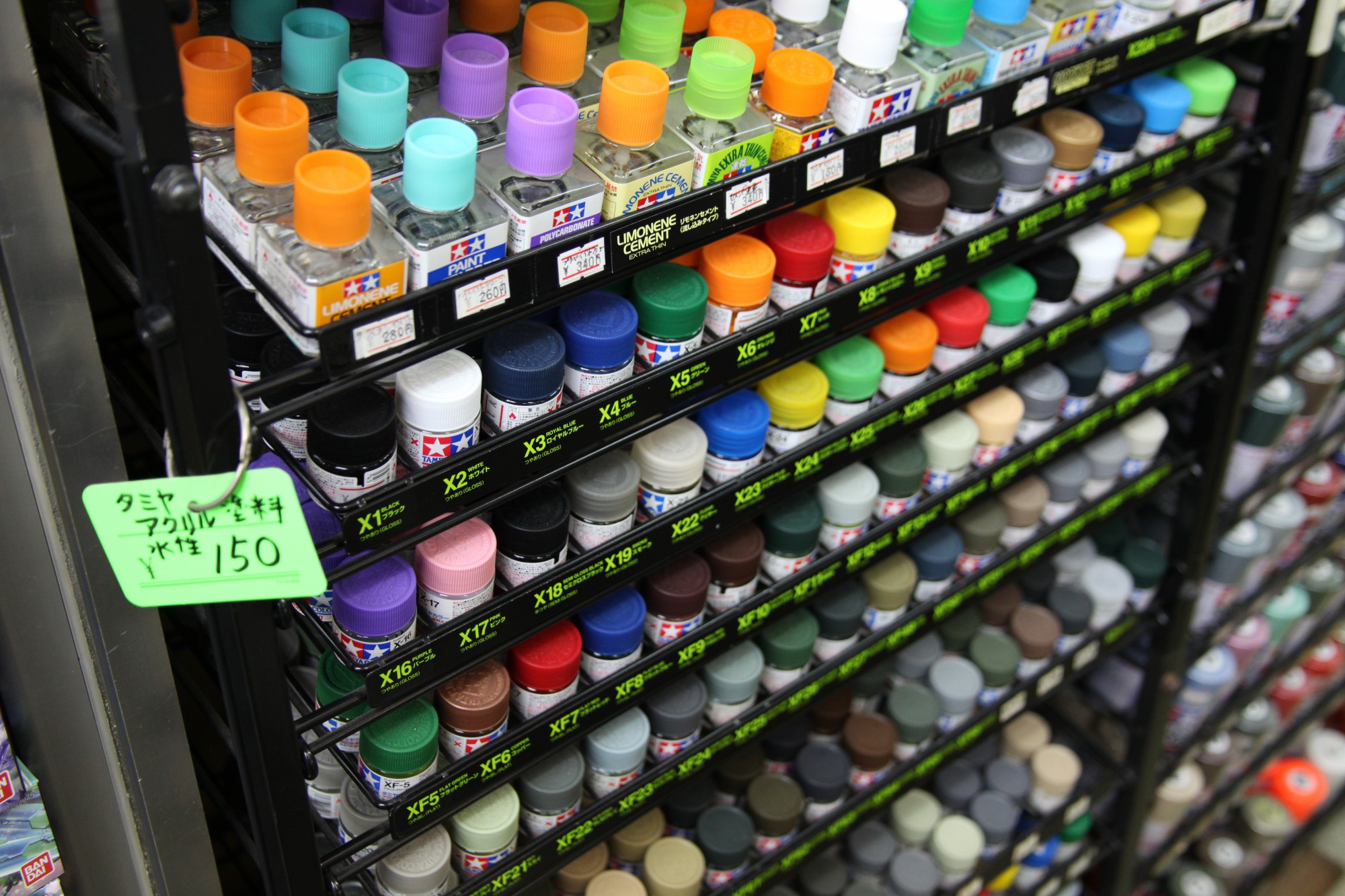 The modeler appreciated the abundance of paint and optional parts.

“ In addition, the wide assortment of plastic models and the wide range of paint and create many options are well aligned when it comes. This is a blessing for the model designer, “says Mr. I.

“When I was a beginner, I had a lot of trials and errors. It is great that there are many shops of with wide assortment.

With the advent of Internet mail order one can buy things by moving our fingers instead of our feet. The model world is no exception.

However, virtual world is not feasible when space is required to house works made a few decades ago and the work made recently in the same place and where variety of exchanges are made by beginners to maniac. Having such a place, maniac is satisfied, and the beginner of the model is brought up, and the model culture is succeeded and it leads to succeeding in the future.

It is still attracting a lot of people, and Ryubundo is receiving   overwhelming support. In search of the “only encounter” and “the experience which can only be obtained here”, the guest carries his feet to the shop today.

parking] None. * There is a paid parking lot to the right at the store. Parking ticket service at purchase over 2000 yen. 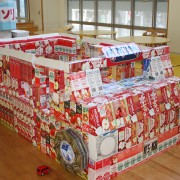 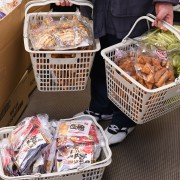 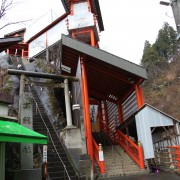 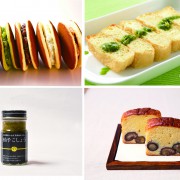 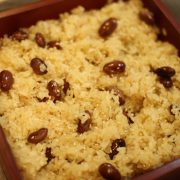 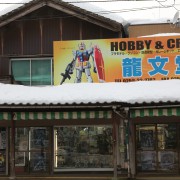